The Invisible Women of Ocean’s 8

Getting away with it in plain sight. 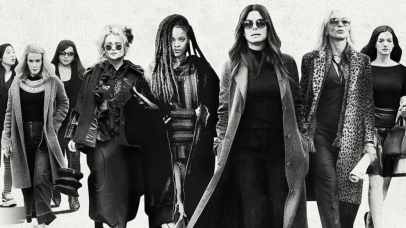 (There are mild spoilers ahead. Read at your own risk.)

I went to see Ocean’s 8 last weekend and it was a delight. It had everything I love in a movie: a tricky plot, fun dialogue, genuine female friendships, characters who are great at their jobs, and an underlying theme that makes you think.

And the men? Eh, they were there, and yeah, they added a thing or two, I guess. They were more plot devices than actual characters.

Oh, wait… Could that, maybe, have been the point?

The women of Ocean’s 8 aren’t love interests or motivating factors for men. They are the heroes. And they are so, so good at what they do. The heist at the center of the movie—set in the world of high fashion and a fancy ball—is specifically female coded. Men literally could not do it.

What I love most about Ocean’s 8 was the way the gang uses society’s assumptions about women as one of their weapons. When one of them asks why there are no men involved, Sandra Bullock’s character says, “A him is noticed, a her is ignored.” Middle-aged women, especially women of color, are invisible, allowing the gang to pull off the heist in plain sight. Rihanna, Mindy Kaling, and Awkwafina play the janitor, the dishwasher and the waitress. Time after time, people look right through them. Sandra Bullock gets to play the entitled, middle-aged white woman—another easily-dismissed stereotype. Even in the film’s final act, they use old women as fences. And they get away with it, of course. If middle-aged women are invisible, then old ones might as well not exist.

The only women who are ever noticed—ever seen—are the young and pretty, so why not use that fact as well? Anne Hathaway’s character becomes a magnificent distraction. Every eye in the room is on her while the brown and black and over-the-hill women get on with the job at hand.

And what do these women buy with all their ill-gotten millions? Surprisingly modest things. A business, a production company, a solo motorcycle trip, an apartment. But they all represent the same thing—a woman who is the boss of herself, where she’s in charge.

And maybe, for once, even seen.

About the Author: Alex Kourvo writes short stories and novels. She loves being her own boss and is glad she didn’t have to pull off a heist to make it happen.