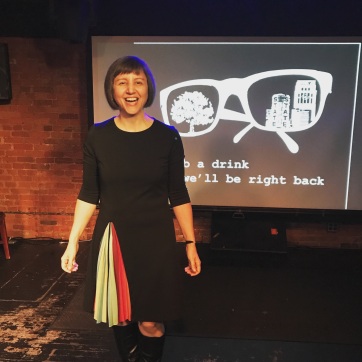 Once a month, nerds gather at their favorite bars to see a trio of 20-minute talks about…well…everything. It’s called Nerd Nite and it happens in cities all across the country. Because I live in a college town, and our Nerd Nite is sponsored by our library, we get a wide range of topics. I’ve attended talks about the science of LED light bulbs, how to critique architecture, and why fruit flies love cake. You never know what you’re going to get at Nerd Nite. Sometimes it’s history, sometimes it’s physics, sometimes it’s…me.

In October, I was a featured speaker at Ann Arbor’s Nerd Nite talking about everyone’s favorite science fiction genre—cyberpunk! 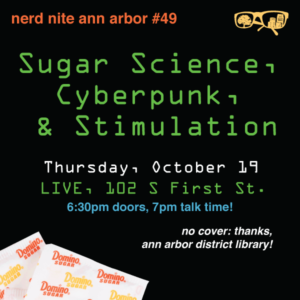 Cyberpunk was everywhere in the 1980s. It started in science fiction, but it influenced fashion, movies, comics, games, advertising, and architecture. After a decade of high-tech, neon-colored, future-looking pop culture, cyberpunk just…went away. Or did it? Could cyberpunk stories still be with us, hiding in plain sight?

Our awesome Ann Arbor District Library taped the talk for their collection, and you can watch the video right on their site.

So if you want to see me nerd out about the genre I love best, here’s the video you never knew you needed.

About the Author: Alex Kourvo is a freelance editor. She loves seeing people nerd out about their passions.