Some non-writing things that help me write better

Most writers use the same tools to get the job done. We all have a library of how-to books, both inspirational and instructional. We all have computers with useful software. Many of us also have things like kitchen timers for writing sprints. But I use three tools that most other writers don’t. I’ve been using each one less than a year, but in that short time, they’ve become essential.

Remember these from the 1990s? Before laptop computers became affordable, these little word processors were state of the art. I thought they were outdated, but after hearing my friends rave about them, I decided to try one myself. 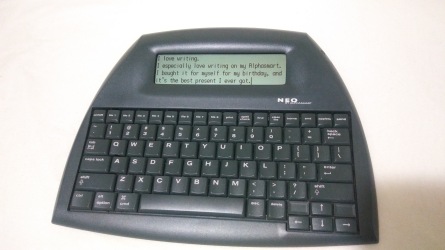 The Alphasmart has a keyboard and a tiny screen. You type, the Alphasmart saves your text, and when you’re done, you use a USB cord to transfer the words to your computer for editing. It weighs almost nothing and runs on three AAA batteries that last about six months.

I love it because literally all I can do with an Alphasmart is type. That means no Twitter, no Google to “just look up one little thing” (that leads to hours of browsing), no email. Even better: I can’t really edit on the Alphasmart. Scrolling backward is tedious, and not worth it for more than a few sentences. It’s much easier to just write myself a note in the text, telling myself to fix it later, and then push forward.

You can’t imagine what this has done for my productivity. I’ve gone from 1000 words an hour on the computer to 1500 an hour on the Alphasmart. And I think they are better words, too.

Back in the day, when these were new, they were a couple hundred dollars. Now you can get them used for $35. Amazon and eBay always seem to have a dozen or so, but they aren’t being made anymore, so the supply is finite.

Writing is appallingly sedentary. People always tell beginning writers that the secret to success is “butt in chair.” Unfortunately, that’s also the secret to numerous health problems. But what choice do writers have? We need our fingers on a keyboard, which means we need to be sitting still. Some people use a standing desk, but that doesn’t incorporate movement.

Even worse, I live in Michigan, where the winters are cold and dark. If I want to get out for a walk, I have to use limited daytime hours, which are also prime writing hours.

A Fitdesk solved that problem neatly. It’s an exercise bike with a desk on it. Now I sit and pedal and the more I write, the fitter I am. The pedals are silent, and not at all distracting. I’ve had my Fitdesk for six months, I weigh five pounds less than I did when I got it, and I feel amazing. I’m no longer thinking about what I’m missing by not exercising outside. I just pedal and write.

Although I write on the Alphasmart, I edit on the computer, staring at a screen for hours at a time. My eyes always gave out before my creativity did.

Until I got Gunnar Glasses. 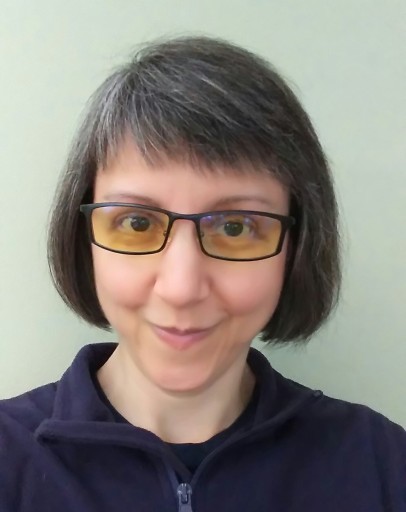 They look ridiculous. I don’t care.

The glasses block the blue light and glare that can cause “computer vision syndrome.” When I wear my Gunnars, I can edit for a full day without eye strain. Plus, I think they are a subconscious signal to my mind. Glasses on? It must be time to work.

I don’t need these three things to write. Give me a pen and a piece of paper and I will happily write anywhere. But I like having these tools.

One helps me write faster.

One helps me edit longer.

And one makes me happier while I do it.

Who wouldn’t want that?

About the Author: Alex Kourvo is an editor-for-hire who is passionate about helping writers.

Ask the Editor: What's the Difference Between a Trope and a Cliche?

Ask the Editor: How Can I Make My Story Stakes Meaningful?

Ask the Editor: How Can I Make my Heroine Three-Dimensional?