Saying goodbye to my old computer…and the old me.

Then I got Pinky, a fully functional Asus EEE pc. She had a ten inch screen, weighed less than three pounds, and had a white keyboard surrounded by a shell the color of bubblegum. Pink is my favorite color and cute is my favorite size, so it’s no wonder I chose this computer. But looks and function weren’t the most important things about Pinky. The most important thing is how I got her.

In 2009, I won the Ann Arbor Book Festival writing contest. The prize was $250. It was the first real money I’d made writing fiction, and I bought Pinky as soon as the check cleared. This was mostly symbolic. Our household budget could have covered the cost of a new computer, but so what? Writers deal in symbols every day. And this was huge. After years of striving, I’d finally earned money with my fiction and I spent it on something that would help me write even more. This computer symbolized my transformation from new writer to working writer. 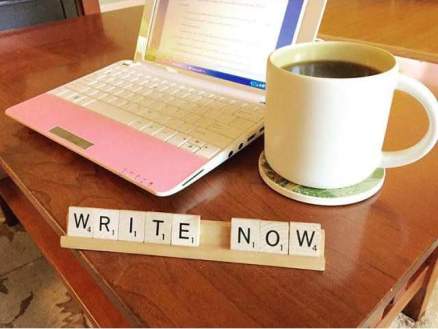 I wrote three novels and a dozen short stories on little Pinky. And book reviews, and blog posts, and Twitter updates. My fingers touched her keys every single day. I loved having her at home, and I loved taking her to coffee shops. She not only fit in my backpack, she fit in my purse. People always asked what kind of computer I was using as they smirked at what looked like a toy. If they asked what I was working on, I’d tell them I was writing high-tech science fiction. Then I’d silently sip my coffee as they did a double take at me and my Barbie computer.

Even when she got slower and the battery was all but useless, I was never tempted by newer, shiner machines. I loved Pinky too much. But eventually her battery wore out and so did her processor. First, Pinky wouldn’t boot up if she wasn’t plugged in. Then, she wouldn’t boot up at all. The techs at Computer Medic couldn’t revive her. Pinky was dead.

I’m writing this post on a perfectly usable gray Dell, also bought with money I earned by writing, but it’s not the same. My new computer isn’t colorful. It’s not cute. It doesn’t even have a name.

And as for Pinky…well, she still sits on my desk. A couple of times, I absentmindedly put her in my backpack before I remembered that she doesn’t work. Eventually I will have to take her to the recycling center. She’ll be sent to China to be stripped for her metals.

As I finally say goodbye to the best writing buddy I’ve ever had, I will probably shed a few tears, because I will also be saying goodbye to the newbie writer I once was.

About the Author: Alex Kourvo writes short stories on a boring, gray computer that desperately needs a nickname.